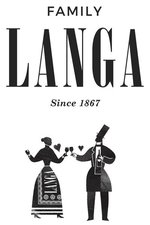 Bodegas Langa today is the principle winery in Calatayud and the only one to treasure a long and interrupted family tradition. The winery is found in an emblematic spot, considered as magical by the number of human settlements that have resided in the area. The Sierra Vicor mountain range, on whose slopes we are found, was a sacred place for the Celtiberians and had a prominent place in the work of the classical poet Marcus Valerius Martialis.
A space where technology and the most modern materials live alongside the traditional methods of understanding wine making. A firmly established philosophy that wine isn’t just a consumer product, but more, something which unites the essence of the natural environment where we nurture our vines, the culture accumulated over thousands of years of shared history and the passion given by five generations.