The traditional method or méthode champenoise

If there's one thing that sets Cava apart from most sparkling wines, it's the production method. Knowledge gained over the years, as well as technological advances, have made it possible to improve the processes. But one thing that remains unchanged is the essence of caring for the vineyard and the quality viticulture, as well as the so-called traditional method, which gives Cava its main characteristics and is one of the secrets to its excellence.

Also known as méthode champenoise, from its French origins, the “traditional method” is differentiated from other systems by a second fermentation in the bottle. 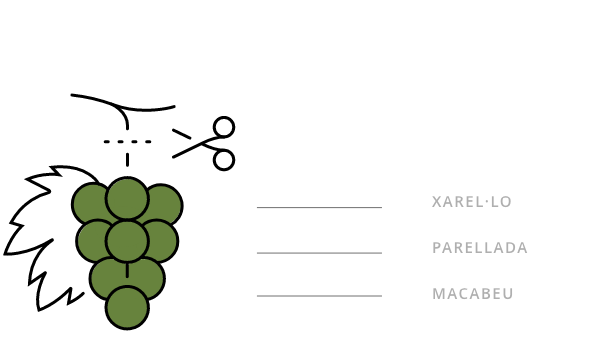 Grapes used to make Cava are harvested largely in August, both manually and by machine. 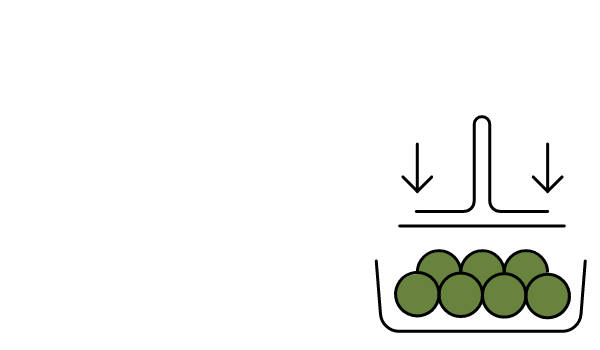 The grapes are pressed gently, in batches separated by variety, with a maximum yield of 66%. 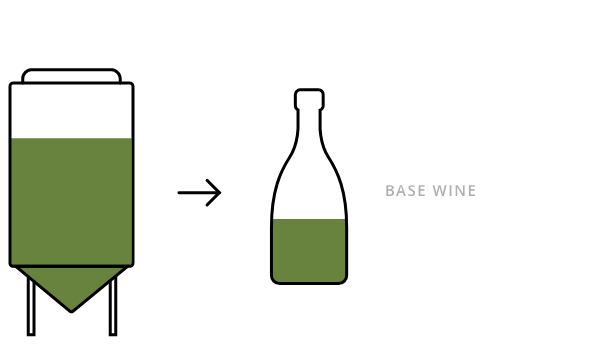 First fermentation (making the base wine)

The best mosto flor (flower must) is used to produce the first fermentation (usually in stainless steel tanks), again separated into different grape varieties. The sugar in the must is converted into alcohol. 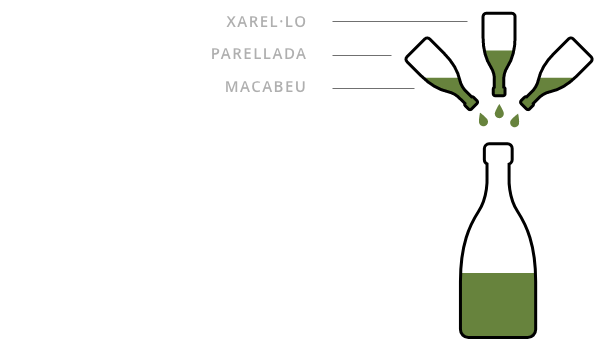 The different base wines obtained from the grape varieties are blended together. Each winemaker makes their own coupage according to the type of Cava that they want to produce. The resulting wine is clarified and stabilised. 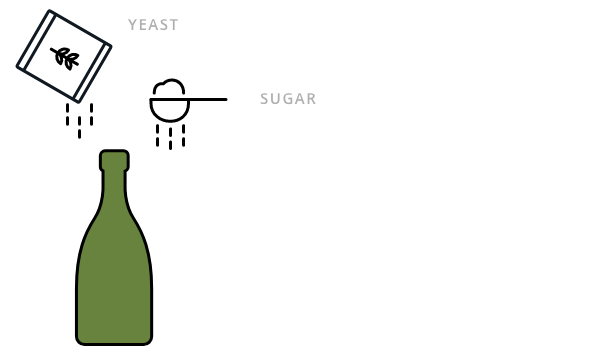 The blend of base wines is bottled and licor de tiraje (tirage liqueur) is added. This mix of yeast and sugar creates the second, and definitive, fermentation inside the bottle, which is then sealed. 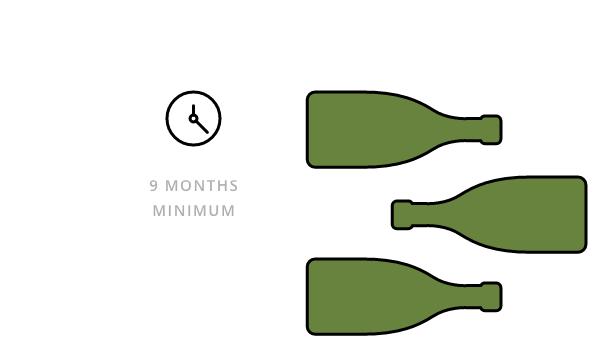 Second fermentation / aging on the lees

The bottles are stacked in a horizontal position (known as en rima in Spanish) in the cave where they will be stored, in silence and with consistent humidity and temperature levels, for a minimum of nine months. Carbon dioxide produced by this second fermentation is trapped in the bottle, forming bubbles. The dead yeast falls to the bottom of the bottle; this “lees” produces the flavour. The Cava is stored “on the lees”. 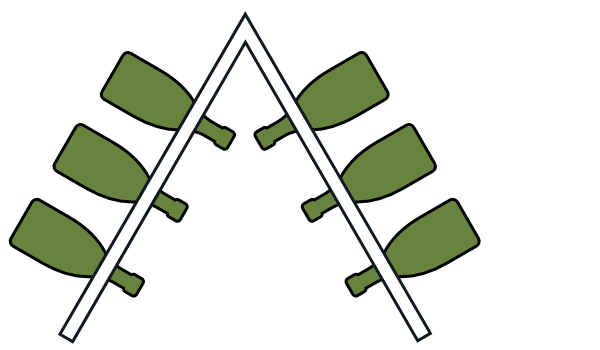 The bottle is gradually turned and tilted, ending up in a vertical position (en punta in Spanish), so that the lees sediment is deposited in the bottle neck (riddling). This may be done manually, or automatically with the bottles housed in pupitres (cages) which are rotated by machines called gyropalettes. 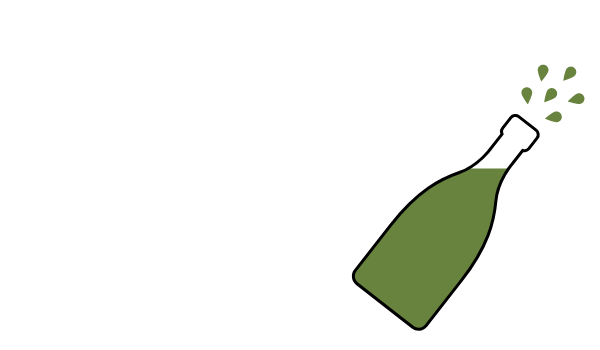 Once the sediment has been collected, it is removed from the bottle. Usually the neck is frozen so that when the cap is taken off, the solids come out easily. This process is called disgorgement. 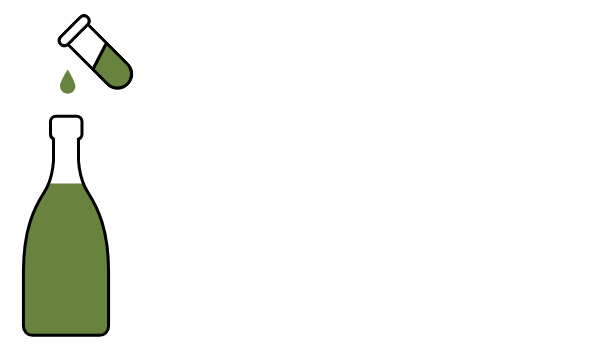 Wine and sugar (except for Brut Nature) are added to replace the liquid that was lost in the disgorgement. 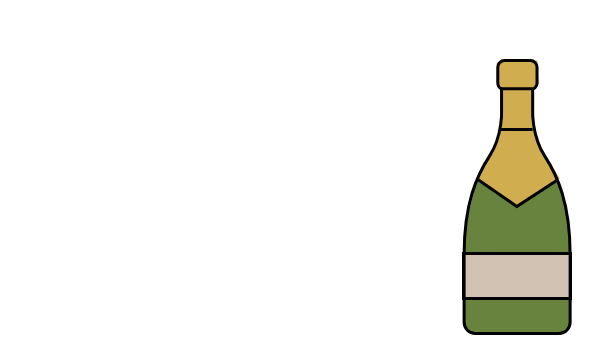 The final cork is put in place, along with the crown cap and wire cage. The foil capsule and label are also added.

The birth of Cava and its worldwide impact 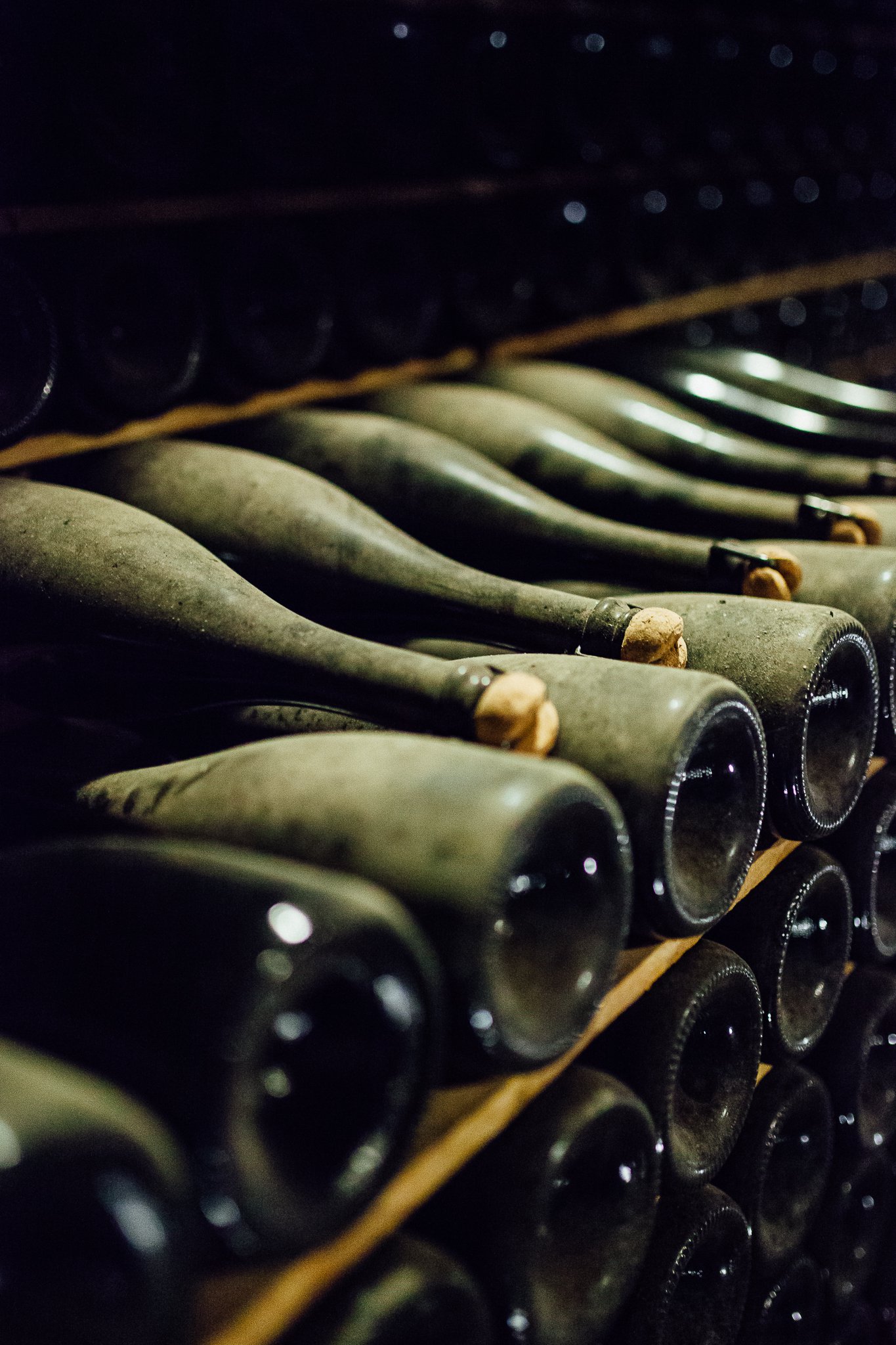 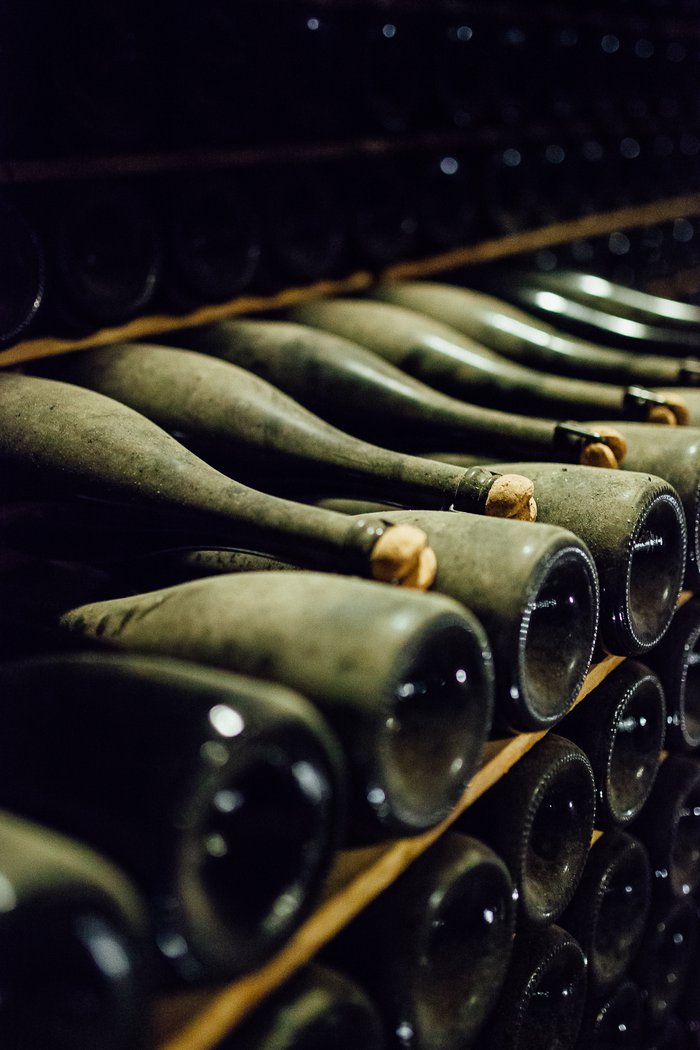 The traditional method, which has been the subject of numerous scientific studies, was originally a reason for rejecting wine. The first bottles with bubbles inside, produced by spontaneous - in some cases undesired - fermentation, were considered to be defective, and were even called “vins du diable” (wines of the devil). After the bubbles were tamed, the sparkling wine shifted over from being unintentional to hugely popular, and many people and their discoveries have since contributed to making Cava the wonderful drink that we enjoy today.

Although the inspiration to produce Cava originates in Champagne, the enthusiasm and dedication of a group of farmers and producers from the Penedés area, more specifically Sant Sadurní d’Anoia, gave rise to the birth of Cava and its future international success. In a region with more than 2,000 years of winemaking tradition, and which suffered the phylloxera epidemic in the mid-19th century, these entrepreneurs refused to give up, and decided to invest in replanting their vineyards and producing quality sparkling wines.

Josep Raventós and his son Manuel, and Marc Mir, are worthy of mention among this group, as well as the Institut Agrícola Català Sant Isidre. One of Europe’s oldest farming associations, this is the nerve centre for research and development of the traditional method applied to local cultivation in the region. The first bottles of Cava, made using the traditional method of second fermentation in the bottle, were produced in Sant Sadurní d’Anoia in 1872. 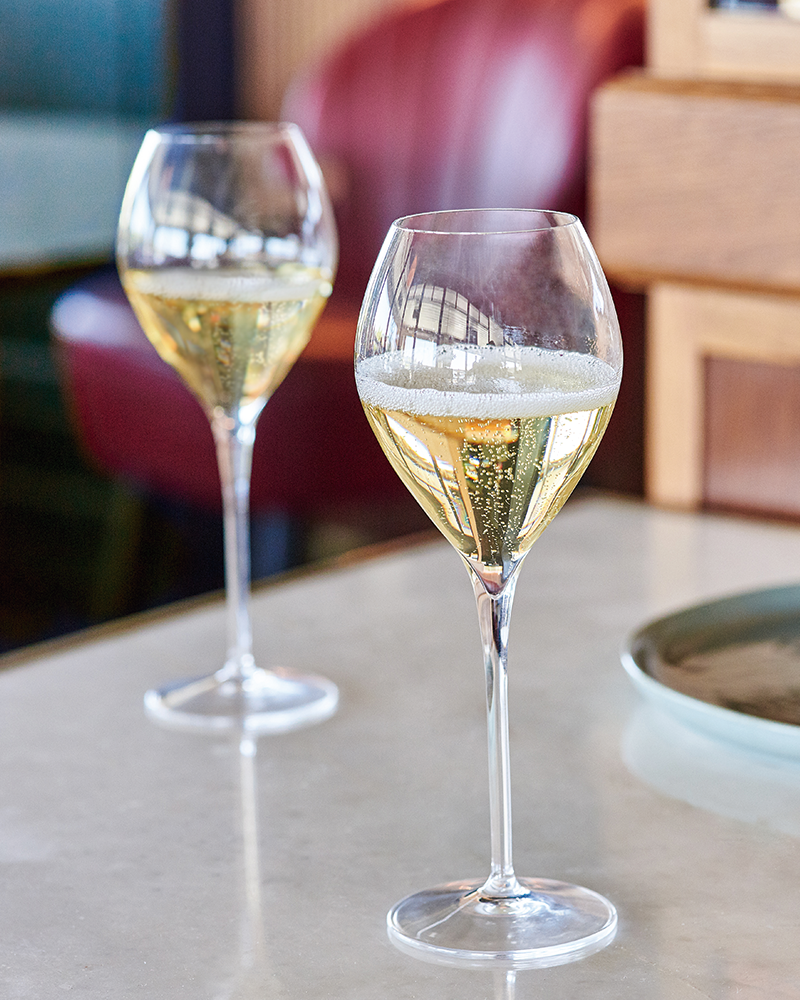 The reward for so much rigour and effort arrived before long: by the late 19th century, exports had increased, and at the start of the 20th century consumption climbed steadily throughout Europe.

Gradually the production and marketing of Cava was consolidated, and in 1932 the first wine regulations in Spain were published, including an initial definition of sparkling wines. But Cava was not mentioned until 1959, and official recognition came a decade later: the confirmation and designation itself of sparkling wines was made using the system “clásico de fermentación en botella y envejecimiento en cava” (classic system of fermentation in the bottle and aging in the cellar).

At the same time, new technology and improvements in production processes contributed to an increase in quality, coinciding with rising Cava consumption not only in Europe, but the rest of the world. Consolidation at an international level came in the 1970s, and up until the early 1980s, when Cava producers were producing more than 100 million bottles, which were sold all around the globe.

Today, the work of those visionaries from the mid-19th century has resulted in the production of 240 million bottles of Cava per year, of which 66% are exported to more than 120 countries. Penedés is still the nucleus of Cava production, with more than 95% of total output.